16 seasons in D1 - My vision of snowboarding transformed

I've been snowboarding for over 30 years. I'm more of a jib & freestyle rider, and I've been riding twin tips for a long time, mostly rail & big air oriented.When I met Serge in 2004, a true snowboarding legend, I was still working in the snowparks, but already at that time, my priority was to ride the paow. So, the first time I had the chance to test this "precious", now "my precious", I quickly understood that this devil of a machine worked like a charm!Right into my damn snowpark! Where frankly amazed, the Dudu gave me great sensations: excellent pop, smooth in rehearsal while knowing how to stay reactive, hyper playful but tolerant under the edge, in short, amazing! Without being however disconcerting! as if it was the extension of what I had always waited for.I never wrinkled anything else again. With Serge, we then varied the models under my feet together. She and I have evolved over time. With of course still as many powder outings, where I particularly appreciate its outstanding flotation, its stability at high speed but also its amazing handling, its ease to swallow the difference in altitude without shooting the backside, its efficiency in managing the flat but also its ease in crossing or turning jumped in the slope, its tolerance in any snow ... Only downside if it takes one ... inevitably sooner or later, you wait for your buddies ...!Then when powder snow is rare, my program is now less freestyle oriented than carving. Between two couloirs and other windlips, I then take a lot of pleasure to carve curves, full speed, elbows and snout in the snow! Thanks to its playful flex, to its sometimes explosive but always tolerant temperament, depending on what you put on it, depending on what you give it, the D1 knows how to fit precisely into the curve. The support roll is healthy, faithful and exhilarating! Whether it's placed, slid, cut, back and front always follow each other naturally.For more than 15 years now, Serge has been delighting us with reliable and resistant finished boards thanks to an irreproachable manufacturing process; with a large choice of sizes and flexes, corresponding to all practices, all desires, all morphologies. From being a pioneer in snowboarding with the "One Sixty", Serge has also become a forerunner in the modern snowboard industry, a Mr. Big Guru of the wasp waist and the sharp nose, of another way of apprehending the slope and the mountain. Finally, as a final challenge to his technical genius, his boards are as much for the resourceful guy, the confirmed guy as for the expert.So every rider, every snowboarder who claims it, should one day be able to ride a DUPRAZ. His vision of snowboarding would be that fatally transformed.Good glide, everyone,Don't be a pain in the ass this winter, and then Arvi! 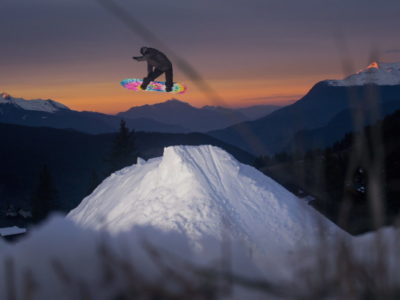 17 seasons of gliding and encounters

This website uses cookies to enhance your experience while browsing the site. Of these cookies, the cookies that are classified as necessary are stored on your browser as they are essential to the operation of the website's basic functionality. We also use third party cookies that help us analyse and understand how you use this website. These cookies will only be stored in your browser with your consent. You also have the option of refusing these cookies. However, refusing some of these cookies may affect your browsing experience.
Necessary Toujours activé
Cookies are absolutely necessary for the proper functioning of the website. This category only includes cookies that provide the basic functionality and security features of the website. These cookies do not store any personal information.
Non-necessary
Cookies that are not particularly necessary for the operation of the Web site and that are used specifically to collect personal data from the user through analytics, advertisements, or other embedded content are called unnecessary cookies. It is mandatory to obtain the user's consent before using these cookies on your website.
Enregistrer & accepter